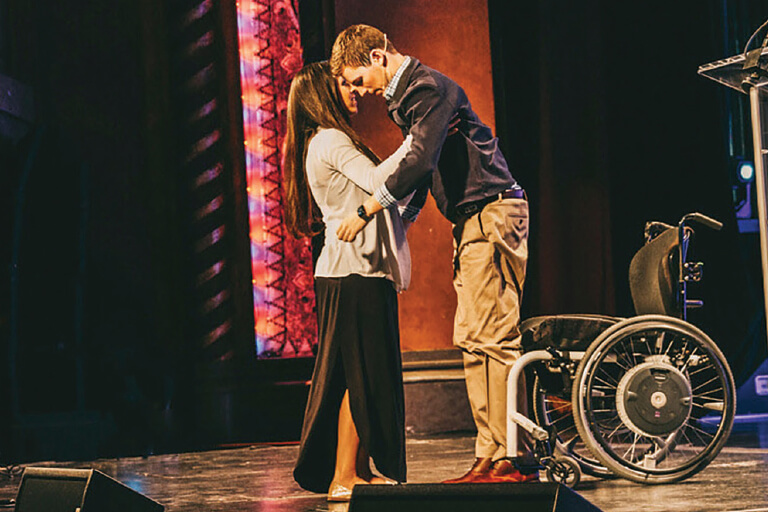 Inspiring hope and helping others

Given the chance, he wouldn't do anything differently. He wouldn't avoid the game, the tackle, the moment that left him paralyzed. It's a remarkable revelation from a man who went through a lot at a young age. But, according to Chris Norton, there is far more to life than physical movement.

"When I was 18, playing sports was my life, and being athletic was my identity. It is what inspired me," says Chris. "So, in many ways, losing the ability to move my body might have been the worst thing I could have imagined happening to me." 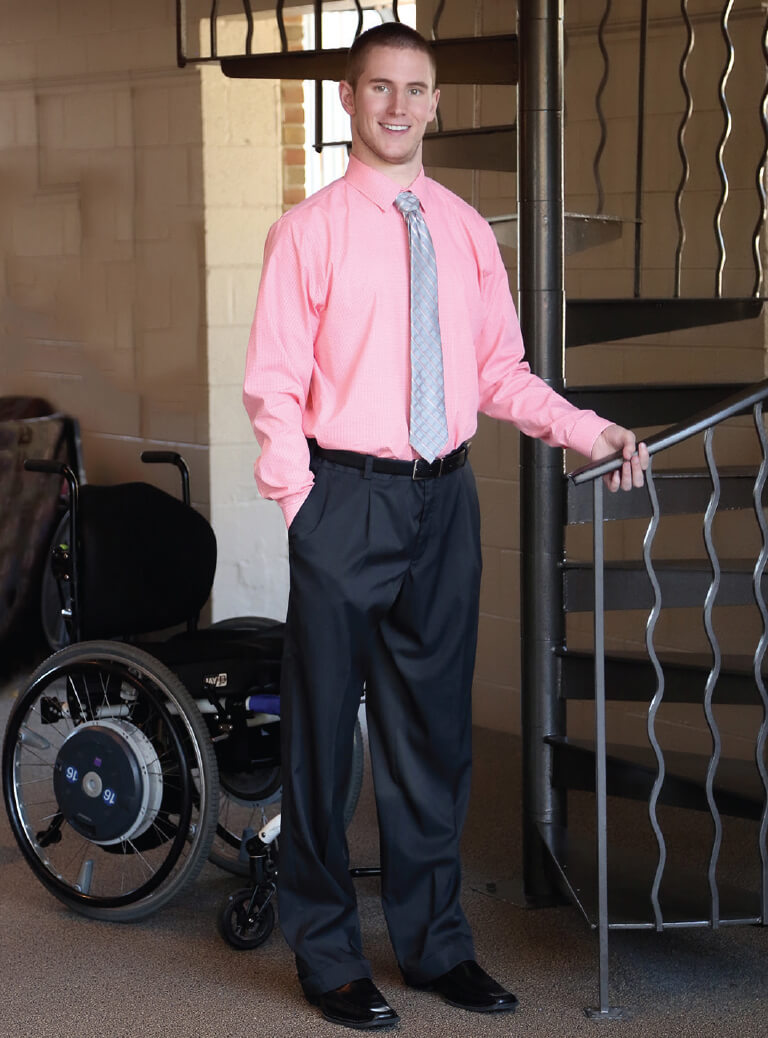 "Today, I am more empowered than ever. That is saying a lot when you consider I depend on others for many basic needs, such as showering or getting dressed. While I've lost much of my physical independence, I have gained so much more. Life is so much more than it ever was before."

The thing about Chris is that he doesn't believe he is the exception to the rule. He truly believes we all have it in us — the ability to persevere and get beyond the problems we face, regardless of their severity.

"If I was on the outside looking in, I don't think I'd believe that I could handle the situation I find myself in today," says Chris. "But as it turns out, I've surprised even my own self."

Please be a bad dream

As the star player for his high school football team, Chris Norton spent a lot of time preparing to play college football. According to his coaches, Chris was a hard worker — intense and focused — the guy you could count on to make things happen on the field. When he started playing for Luther College in Decorah, Iowa, Chris was living his dream.

His dream was cut short only a few months later. Making a tackle on a kickoff, Chris sprinted down the field. The return man veered right at him, and their bodies collided. When the pile cleared, Chris was face down, motionless. He couldn't feel a thing. After a harrowing 25-minute delay, he was rushed to the hospital.

"I couldn't really process what was happening. I hoped it was a bad dream. I craved normality. I was supposed to be on the football field, helping my team win, planning for a night out with friends," says Chris. "I was not supposed to be parked on a hospital gurney with my family's worried faces hovering above me."

Later that day, Chris was life-flighted to Rochester, Minnesota, where he learned he had fractured his C3-C4 vertebrae. He was told he had a three percent chance of ever regaining movement below the neck.

"I struggled to understand how this could be happening," says Chris. "My first reaction was anger. I naively assumed that doctors had all the answers, and when they didn't, it threw me."

Chris learned that recovering from a spinal cord injury was basically a waiting game.

In his prayers, he asked for an answer to why this was happening, and what was in store for his life going forward. "I didn't doubt my faith. But I wanted to know the purpose behind the injury," says Chris. "I felt this would help me swallow my fate easier, because at that moment, I felt like every choice I had for the rest of my life was gone."

Putting his game face on

Over the next year, the answers to Chris' prayers slowly began to surface. He spent most of that time in Rochester, Minnesota, in intense, daily therapy sessions. Moments of hope were intermingled with moments of despair. He met others with similar physical and emotional struggles.

"When you choose to do what is hard, like never giving up, developing a positive attitude, and working to overcome problems, you will set yourself up for happiness and success."

"Slowly, my perceptions began to change," recalls Chris. "I learned we all feel this way at certain points in our life — trapped in situations that we didn't plan for — until we realize we have a choice. We can either give up, or move forward."

His coaches and family saw a transformation taking place. Chris was the same guy — the one with intense determination and focus. But now, he was taking all the energy he used to devote to athletics, and channeling into his recovery.

Every moment he was awake, he worked. When things weren't going well, he would ask himself, "Should I quit?" And the answer was always no, says Chris. "Yes, I can go through this," adds Chris. "That is what I learned."

He also wanted to continue his studies as soon as possible. Family and friends helped Chris make arrangements to return to Luther the following fall. His sister, Alex, a registered nurse, moved to Decorah and cared for Chris while he attended college.

A positive support network inspired him to work even harder.

Chris met many important milestones during his four years at Luther. Aside from going to daily therapy, studying for classes, and navigating life in a wheelchair, Chris started a nonprofit. And, he met the love of his life.

In 2013, Chris was introduced to Emily Summers through a mutual friend. They had an immediate connection, and Emily became an integral part of his life and his recovery.

All this time, Chris worked to meet his goal of walking on graduation day. He knew he needed to dig deep to reach his goal. So, he studied harder and finished classes a semester early, so he could move to Michigan to enroll in a full-time therapy program, prior to commencement.

His hard work paid off on graduation day. With help from Emily, Chris stood from his wheelchair and walked across the stage to receive his diploma. His efforts brought everyone in attendance to their feet. 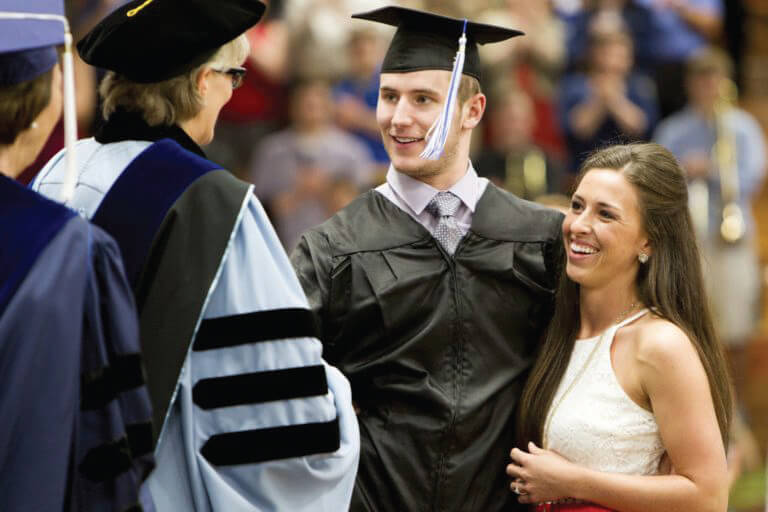 "I didn't expect that level of emotion," says Chris. "The energy in the room was unbelievable."

What's more, the night before graduation, Chris had pulled off a surprise wedding proposal. Emily said yes. "We have a pretty good love story," laughs Chris.

As Chris' story gained national attention, he and Emily were whisked off to New York City, where they were featured on "Good Morning America" the day after graduation.

"I have many proud moments, but none quite as profound as seeing people using the equipment funded through SCI CAN."

Throughout his time in recovery, Chris was taken aback by the lack of quality therapy and equipment for people with spinal cord injuries and neurological muscular disorders. One piece of equipment, in particular — a $30,000 therapeutic bike provided by an NCAA insurance policy — was a key part of his recovery. "Most people have to travel great distances to use this type of equipment."

Seeing the critical need and the difference it could make in the lives of others, Chris launched the SCI CAN Foundation. In a little over four years, SCI CAN has flourished, raising $600,000. All of the funds raised through SCI CAN support local organizations that are seeking to better lives for those with disabilities.

"I have many proud moments, but none quite as profound as seeing people using the equipment funded through SCI CAN," says Chris.

Today, Chris lives in Florida, where he spends three hours a day, five days a week, working with a trainer. The exercise is painstaking, but it is paying off. Today, he can walk much further, and with less assistance, than ever before. His progress is measured in inches and seconds. He continues to work on standing unassisted, and is on his feet at least 90 minutes during his training.

Aside from recovery, a new sense of purpose has emerged in Chris' life: Using his story to inspire and help others. He spends much of his time traveling the country, speaking at high schools, universities, and corporations. His message of facing adversity and standing up to life's problems resonates with audiences young and old. 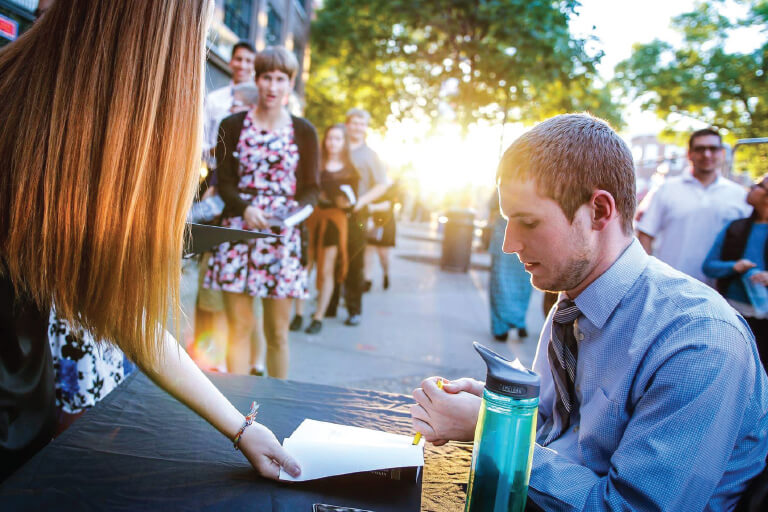 "I'm there to tell them that whatever they are facing, something good can come of this. You've got to have two things. One is the right attitude," says Chris. "The other is the ability to put in the hard work. It may take time, but I believe if you persevere, a sense of purpose can emerge from the most tragic circumstances. I am living proof."

For Chris Norton, life is no longer about physical movement. "Life is about making a difference. It's about relationships. It's about community. With all of these things in place, I'm happier than I've ever been."

More to the story

Visit ChrisNorton.org External Site to learn more about Chris Norton's story. His story is also told in a brand new movie, 7 Yards. Find out where you can stream it today External Site! 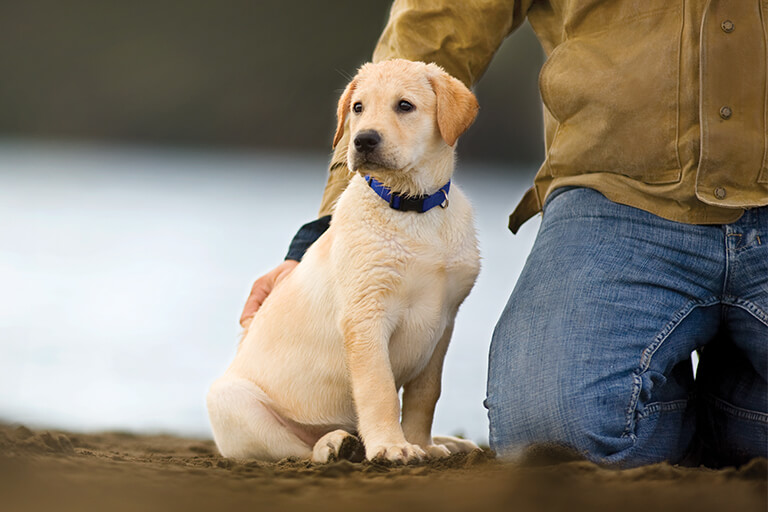