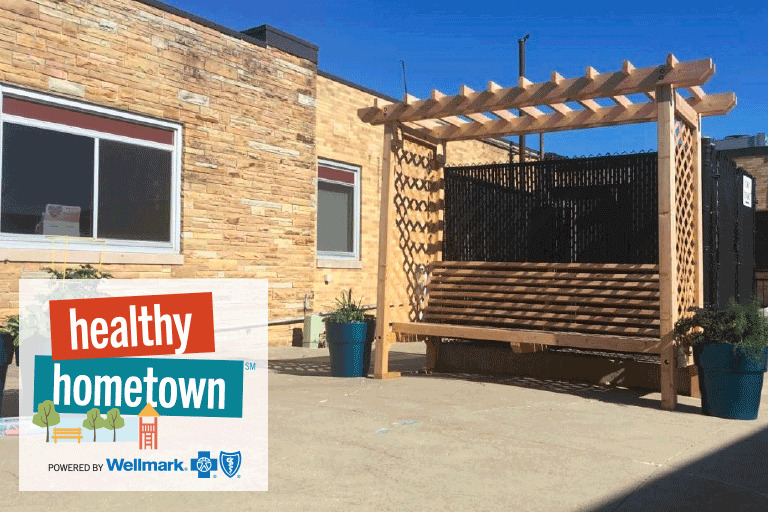 Community health improvement efforts in West Union, a community of around 2,500 residents in northeast Iowa, all started with identifying safe routes for kids to walk to school in 2011. “It’s so easy to focus on kids, because the adults will get on board if it’s for the kids,” says Jessica Wegner, Gundersen Palmer community health coordinator and leader of the S.T.E.P.S. — Stakeholders Taking Exceptional Pride in Strides — group.

Two years later, the community implemented its first walking school bus, where volunteers lead groups of kids to school and back in the spring and fall. With 25 volunteers walking alongside 40 kids five days a week, it made sense to make sure the sidewalks along the three routes were in tip-top shape. 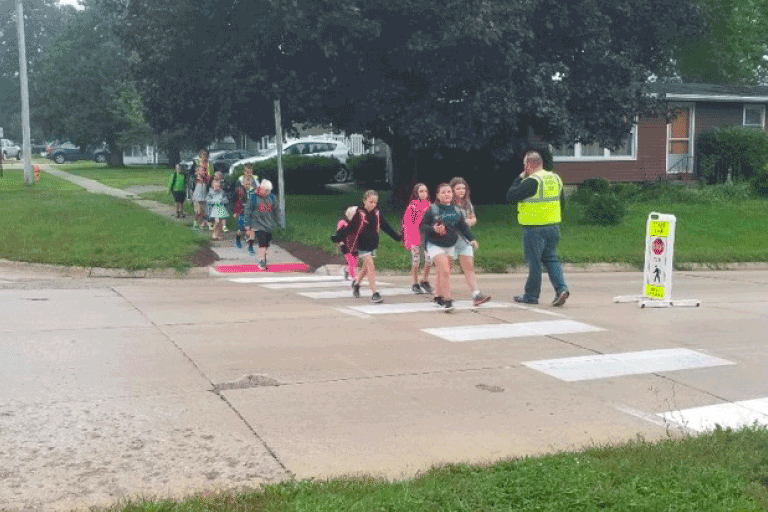 In total, West Union has replaced nearly 7,000 feet of sidewalk, made 36 pedestrian ramps Americans with Disabilities Act (ADA) compliant, improved crosswalk visibility with continental-style striping, and painted a walk/bike lane on Lincoln Way. And, that’s just one part of their community improvement efforts. In recognition of  West Union's work encouraging residents to eat well, move more and feel better, the community received a 2020 Healthy HometownSM Powered by Wellmark Community Award Opens New Window in February. Learn more about what they’ve done — and the partnerships they’ve formed to make it all happen.

Meeting residents where they are

Wegner’s main advice for undertaking community health initiatives is to meet residents where they are — and, in the case of the Gundersen Palmer Community Teaching Kitchen, she means that quite literally. Though fire code regulations prevented Wegner’s original plan to house a community teaching kitchen in a conference room at Gundersen Palmer Lutheran Hospital, she was not discouraged. With some collaboration from local partners, they decided to take it on the road.

Launched in January 2019, the Gundersen Palmer Community Teaching Kitchen is part of a county-wide program to help tackle obesity and address the limited access to fresh, healthy food in the community. It has eight participant stations and one instruction station and is stocked with everyday kitchen tools and appliances that residents are likely to already have or can easily purchase. Instructors use curriculum from Iowa State University Extension and Outreach to teach residents how to make healthy food choices, prepare food, and use proper food safety. When class isn’t in session, everything fits in a small cargo trailer. 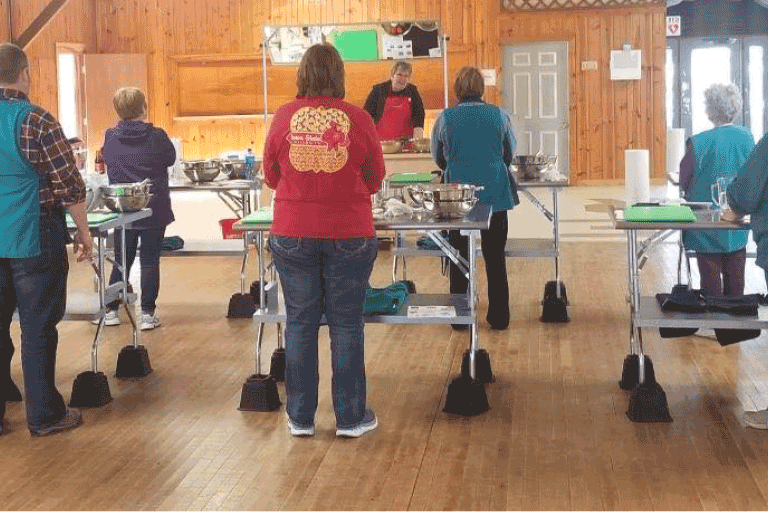 Offering classes in various locations — like the Fayette County Fairgrounds, the North Fayette Valley Community Coalition Youth Center and the Oelwein Plaza — makes it easier for residents to attend classes. “While bringing the education to them was not what we originally intended, it turned out better than we thought,” says Wegner. “When we come to residents, it decreases their expense and travel time — which is key in a rural community like ours.”

Growing and learning together

Whether you live in an urban area or rural community, food scarcity doesn’t discriminate — West Union included. “You want to be able to address it in a non-shaming way,” Wegner says. “I’ve discovered in most situations of food insecurity, it’s either an access or education gap. Providing education, tools and knowledge of accessible locations allow individuals to be empowered to make healthier choices.” That’s where the Grow with Us programming at Kaleidoscope Kids Childcare Center (KKCC) comes in. The program reaches 125 children, 82 families. and has 25 staff members who help.

The center partnered with the Fayette County Master Gardeners to teach toddlers to school-age kids how to plant, grow and care for a variety of vegetables in raised garden beds and a hydroponic garden indoors.

To help tackle food insecurity, everything that’s grown and harvested is prepared and eaten by the children and staff at the center or taken home to share with their families. “The kitchen at the center uses quite a bit of produce to feed the kids, which encourages them to try different things,” Wegner says. “The kids really took ownership of not only growing the food but eating it as well.”

Families can also bring in produce to donate or trade for food grown at the center. “One of the coolest stories is from a little boy whose family grows sweet corn,” Wegner says. “He was so excited about picking his sweetcorn and share with his friends at KKCC.”

Creating a sense of place

Another key part of fostering community relationships to help residents feel better is creating spaces for them to gather. What began as an idea from an employee at Gundersen Palmer Lutheran Hospital to beautify the outdoor space between the hospital and the health clinic ended up becoming a vibrant, outdoor lobby for patients, visitors and staff in May 2019. “Previously, we didn’t have any dedicated space to bring patients outside,” Wegner says. “Maybe someone’s family member is on hospice and they need to step out for minute — not to leave, just to get outside — and now they have this outdoor waiting lobby. That was really the idea behind the space.”

As with other community improvement projects in West Union, multiple partners came together to make the outdoor lobby happen. Healthy Hometown helped with the planning, the Palmer Memorial Foundation provided support, local high school students in a woodworking class built two pergola benches, and 5-2-1-0 funding provided a flower bed and gardening pots. To bring everything full circle, herbs and produce grown in the outdoor lobby are used in the hospital kitchen and for upcoming classes with the mobile teaching kitchen.

The impact of community improvement

After the completion of these projects, Wegner has started to see a shift in her community take place. The local coffee shop organized a Saturday morning run/walk that takes advantage of the new sidewalks. A walking school bus volunteer who participates daily lost a lot of weight. And, at hospital administration meetings in the afternoon, it’s rare to see anyone with caffeinated beverage — they usually stick to water. “It takes years, you’re not going to be able to do it all right away,” Wegner says. “But it’s important to celebrate small successes along the way.” And, she says, don’t keep them to yourself. “Someone might hear about what you’re doing, and it can spark interest from someone who you didn’t know wanted to be involved.” 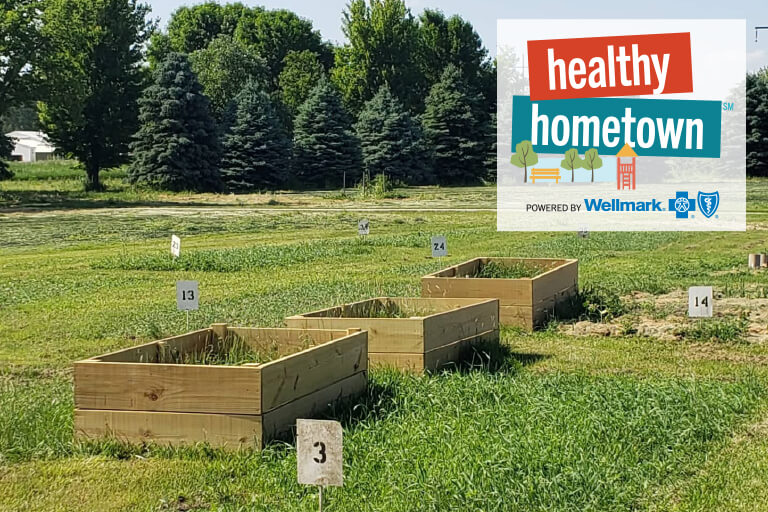