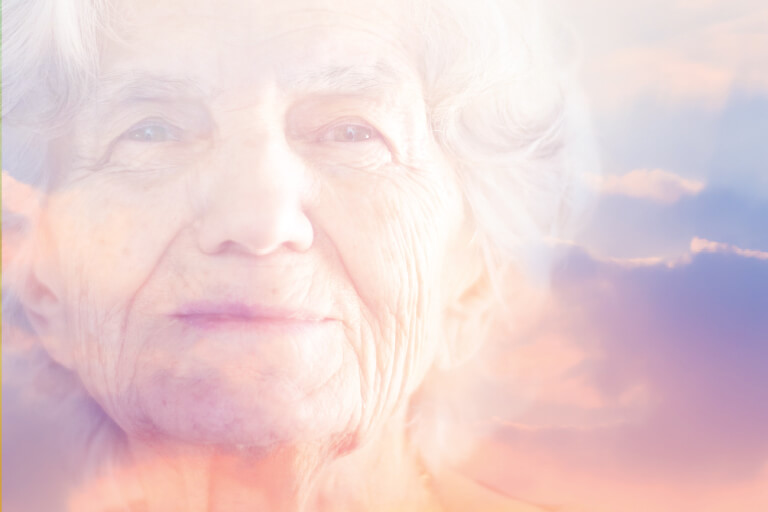 Many families make a choice to care for a loved one who has dementia or Alzheimer’s. Here is one person’s experience of caring for his mother for four years.

“I appreciate all you’ve done for me, but I really just want to go home.” Those were the words Wellmark member Mike McDowell, of Des Moines, Iowa, heard repeatedly from his mother, Marjorie. He spent four years as her caregiver while she suffered from dementia, and eventually, Alzheimer’s disease.

As time went by, the polite requests to “go home” became more of a demand.

Over time, more of her was lost. Marjorie was not the same woman who so lovingly raised him. She wasn’t the same mother who was always in his corner. That is, until she would have brief moments where she was that woman again, the one who he remembered.

“That’s what made it so complex,” says Mike. “The back and forth. The moments of clarity were there. While they kept me going, those moments also made it brutal to witness the downward spiral.”

In his mom’s corner

Marjorie had shown some signs of dementia about five years ago, when she was 65 years old. “My older brothers were concerned, but I just wasn’t ready to come to terms with it,” says Mike.

During that time, a routine hip replacement surgery didn’t go as expected, causing an infection. Over a period of 10 months, she had several surgical procedures to repair the damage. Her life at the time was a series of skilled nursing care and hospital stays. In the midst of this, her husband, Lloyd, passed away. It was two days before their 48-year anniversary.

“I don’t know if it was the grief of losing her husband, or if it was the inability to really mourn my father’s passing because of her own health problems, but we really became concerned about her gaps in memory during those months,” says Mike. “It was a pivotal time, and it became painfully obvious that she could never go back to living on her own.”

Knowing she couldn’t afford to live in the home she had shared with her husband, Mike bought a house of his own, and set it up so that his mother could get around safely.

He knew it wouldn’t be easy. After all, he had a demanding, full-time job. Mike was also in a new relationship with Pam, a woman he envisioned himself with long-term. But, he didn’t know if Pam would understand that his first priority was his commitment to his mother.

“Still, it was a no-brainer,” Mike says. “You see, my mother was always there for me. She helped me understand what it’s really like to have someone in your corner. Now was my chance to be that person for her.”

The mom he remembers

Despite an unhappy childhood of her own, or perhaps because of it, Marjorie (shown center in the photo) put family at the center of everything. Lloyd (far right) and Marjorie had three sons, and Mike (shown second from left) was the youngest. 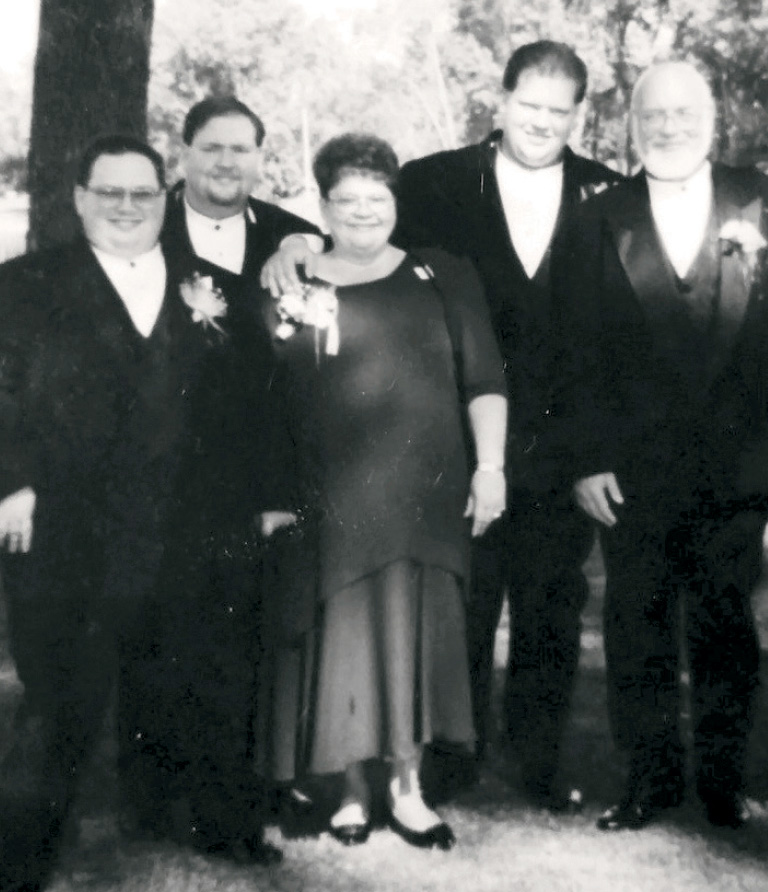 “Growing up, both my mom and dad worked full time,” says Mike, “Yet, we never felt shorted. The three of us enjoyed baseball, Cub Scouts, and all kinds of other activities. Mom was 100 percent devoted. She was a second mother to so many of my friends. We didn’t have much money. But we had great times. I have so many fond memories.”

When Mike was 13, his parents missed having little ones around. So, they applied to be foster parents, but only if Mike and his brothers were OK with it. “I always wanted younger siblings, so I was on board immediately,” according to Mike.

Soon, the family of five grew to a family of 9. “My parents took in kids who desperately needed help, and provided [them] a loving home,” says Mike. “That is the kind of people they were.”

Fast forward to 2014, and mother and son had swapped places. She was the one who needed help. Mike stepped up to the plate.

About a year after she moved in with her son, the calls began. Marjorie would call Mike at work to ask him what time it was, for example. Later, she would call him and be convinced she was at the mall or some other location, even though she was sitting in the living room.

As time progressed, Marjorie would fill Mike’s voicemail to capacity. Yet, when Mike tried to reach her, she wouldn’t answer. Later, she would say she couldn’t figure out how to use the phone. She was suspicious of his relationship with Pam. She suffered from delusions and paranoia.

“Thankfully, my employer was understanding,” says Mike. “Because it was stressful and disruptive, at times.”

Often, Marjorie insisted on going home. But there was no convincing her that she was already at home. Once, in an act of desperation, Mike decided to drive her to her previous home. As they pulled up, she insisted, “This isn’t my house.” It took a few moments for Mike to understand that she wanted to return to the home where she raised her family.

“When I couldn’t take her there, she thought I was betraying her,” says Mike. “She asked, ‘Why are you doing this to me?’ I knew it was the disease talking. Yet, it felt so hurtful.”

Shortly after Marjorie’s official diagnosis of Alzheimer’s in 2017, it was clear that for her safety and because of repeated falls, Marjorie needed more specialized care. The family decided to place her in a facility that focused on Alzheimer’s and dementia care.

“I know many families deal with this sort of thing, but it doesn’t make it any easier,” admits Mike. “It broke my heart. Because physically, she was healthy. But once she was in the facility, her health quickly deteriorated. One day she would know you, the next day she wouldn’t. The day she didn’t recognize her granddaughters, who she loved more than anything in this world — let’s just say that was a sad day.”

Throughout her stay, she begged to return home, a request that tore at her family’s heartstrings. Just six months after being placed in the facility, on Dec. 18, 2018, Marjorie passed away. She was just 70 years old.

Caregiving is not for the faint of heart

Thoughts of his mother remain fresh on Mike’s mind. “I never realized how much people go through, watching the gradual decline of someone you love.”

When asked if he has any advice for other people considering caregiving for loved ones, Mike says that if he had it to do over again, he would have accepted help. For example, he would have arranged weekend care for his mother, just to get an occasional break. “In retrospect, it seems like a prideful thing to think I could do it on my own,” he laments. “It’s hard to see your own limits when you’re in the midst of it.”

“Like a lot of people, I could have heard all the cautionary tales in the world, and I still would have thought I could do it well,” says Mike. “But, it really hits you hard, to have the loved one you are caring for question your motives and methods. If you are going to provide this type of care, you have to realize it will be a long road and a hard road.”

Mike adds that you should do everything you can to understand what you’re getting into. As hard as it is to know what the future holds, do your research, be prepared, and ask for help when you need it.

“I’m not sure anyone would describe caregiving as a happy experience,” says Mike. “It is, in fact, a heartbreaking journey. Yet, I feel so lucky that I could do it for her as long as I could.”

Today, life is bittersweet for Mike as he mourns the loss of his mother. He proposed to Pam, she accepted, and they are planning a fall 2019 wedding. “Pam is a gift. She was there for me through this incredibly rough time. She is, in fact, remarkable.”

Understanding how tough the journey is, would Mike do it all again? “Yes, no doubt about it,” he says, through tears. “I just wish I could have held on a little longer.”

If you are a caregiver, you are not alone External Site. 5.7 million Americans are living with Alzheimer’s. By 2050, this number is projected to rise to nearly 14 million. 1 in 3 seniors dies with Alzheimer’s or another dementia.

Caring for a person with Alzheimer’s or dementia often involves a team of people. Whether you provide daily caregiving, participate in decision-making, or simply care about a person with the disease — there are resources to help.

To learn what to expect and how to prepare, visit the Alzheimer's Association website External Site. You can also find resources for caregivers External Site from the Family Caregiving Alliance.

Help for caregivers through myWellmark®

Manage your loved one’s care with myWellmark. When you log in or register for myWellmark Opens New Window, you can easily find all the information you need, including:

If you are caring for a loved one, BeWell 24/7 can help. Our health advocacy service can help take some of the stress and hassle out of the process. Call Eight, Four, Four, Eight, Four, Be Well844-84-BEWELL to get help from a health advocate for health care issues and tasks like: 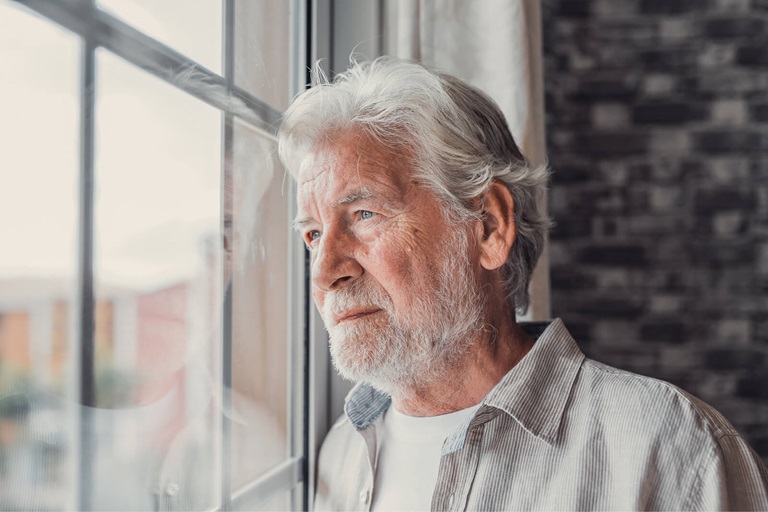