At one time, there were nine different rail lines converging in Aberdeen, South Dakota, from all directions. This distinction earned it the nickname “Hub City.”

“Aberdeen is 100 miles from a community of any size in South Dakota,” says Lisa Anderson, the director of marketing for the chamber of commerce. “It makes us unique. We are a regional hub for health care, business, education and recreation. You could say we’re an island unto ourselves. But we are also dependent on the communities around us.”

Today, the city of 28,000 residents in northeastern South Dakota is the third-largest in the state, and it continues to live up to its “hub city” status. What’s more, Aberdeen leaders and community members are continually taking steps to improve the health of their community.

As a result of its ongoing community improvement work, Aberdeen received the 2021 Healthy HometownSM Powered by Wellmark Community Award. “The award recognizes and encourages the people who are investing in and making decisions on behalf of our community,” says Anderson. “It helps them understand the impact they’re having, not just on Aberdeen, but on surrounding communities.”

Here are just a few projects Aberdeen completed in the last year that helped them earn this recognition.

Aberdeen has made significant improvements for pedestrian safety at the local middle schools and hospitals.

Since there is no public bussing in Aberdeen, all of the students either walk or bike to school or are dropped off and picked up by adults. The high traffic around one of the middle schools, in particular, was a safety issue for both pedestrians and drivers. To combat the problem, a high visibility, solar-powered, push-button activated crosswalk system was installed. In addition, a left turning lane and new signage was added to help with the flow of traffic and to increase visibility.

A similar approach was taken at one of the hospitals. “Avera is the largest employer in town, near downtown and across from the major grocery store. There is simply not enough space to allow for a large parking lot on campus. So, they depend on nearby properties for parking,” says Anderson. “We just really needed a safer way for employees and visitors to get to the hospital.”

Due to the improvements, the area near the hospital now has a high-visibility, in-road crosswalk and stop bars. There is also a flashing stop sign and more visible markings on the street to make drivers slow down.

“All of these improvements have definitely helped our residents feel safer getting to and from school and work,” says Anderson. “It shows our community that we are committed to their safety.”

The most recent addition to downtown Aberdeen is Malchow Plaza. This expansive project was created as a gathering place for the community. It's also a place for community and regional events throughout the year. Since opening in the summer of 2021, more than 10,000 people have visited the plaza for the weekly farmer's market, free concerts, business conferences and meetings, children's and family activities, and Food Truck Friday.

The plaza also provides space for local nonprofits to collaborate and share resources. The Aberdeen Downtown Association, Aberdeen Chamber of Commerce, Convention & Visitors Bureau and more are all in the plaza, working together.

“Over 400 individuals were involved in making this space happen," says Anderson. "It was a years-long process of listening, collaborating, compromising and ultimately, finding solutions that work for everyone,” says Anderson.

“Overall, the process of creating the plaza, and now seeing it as a reality, has really helped our community feel closer,” says Anderson. “The space allows us to be part of something bigger than ourselves. When you’re in the plaza, you can see things happening. It’s a space for people to mix and mingle, yes, but it’s also heightened our sense of community.”

A key feature at Malchow Plaza is the public art mural External Site. Painted by Aberdeen artists, it contains a variety of Aberdeen-specific vignettes. "It is a unique mural that really draws people in. You'll see people gathered round, pointing, discovering and talking," says Anderson.

In addition to the mural, community leaders invited local artists to paint representative scenes of the Aberdeen area on the windows of participating businesses. Each window painting is based on the prompt: "What reminds you of living and celebrating in Aberdeen?"

The success of the artwork has already spurred future plans for more murals and public artwork in downtown Aberdeen.

What’s next for Aberdeen?

Aberdeen is looking to the future, and will be paying special attention to workforce retention. “We have several large employers, two hospitals, a state university and a private college,” says Anderson. “We really need to recruit young people who want to live and work here, and integrate into the community. We strive to be a welcoming community. But let’s face it, winter can be harsh. So, we want to help people get settled in and know how to live a happy, healthy life in Aberdeen.”

What advice does she have for communities who are considering participating in Healthy Hometown? “It is definitely worth getting involved,” says Anderson. “Keep track of the initiatives you have in place. Find people in your community who are passionate and willing to help."

She adds, "We applied for a few years before we got the award. So don't get discouraged. It may take some time to get the momentum going. I’m just grateful to Wellmark for the gift and for the guidance. Now, we are excited to brainstorm ideas for the future and to put the money back into our community.”

The Healthy HometownSM Powered by Wellmark Community Award is an annual award that celebrates the successes of communities in Iowa and South Dakota that are working to make their hometowns healthier, more active places to live. If you want to follow in Aberdeens’s footsteps and make positive changes to your community, check out Healthy Hometown online Opens New Window or email HealthyHometown@Wellmark.com Send Email for more information. 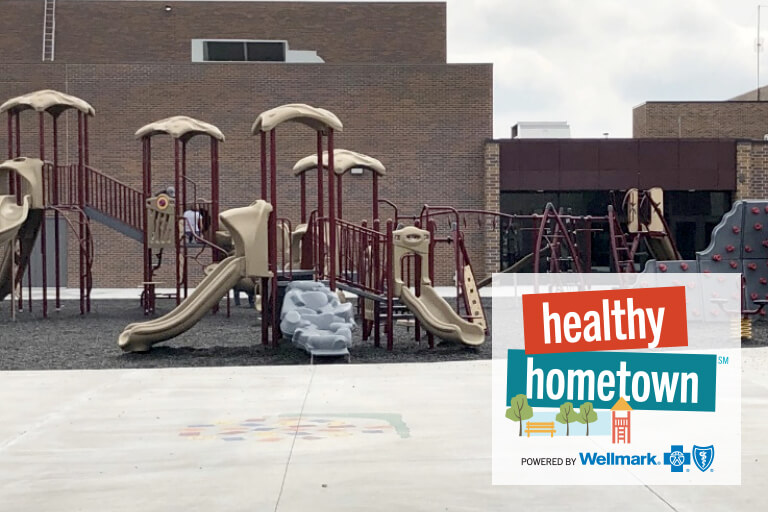